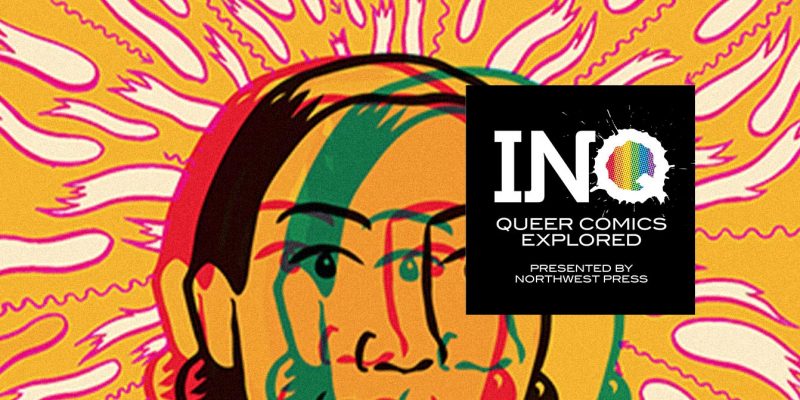 MariNaomi has been creating raw, personal autobio comics for nearly 20 years now, providing an intimate and not-always-flattering look into the particulars of her dating life, sexuality, family relationships, and more. This unvarnished honesty is simultaneously endearing and unsettling, and makes for powerful comics reading.

Mari has a new book coming out in May from 2D Cloud called Turning Japanese.

MariNaomi: Turning Japanese is a comics memoir about working in illegal Japanese hostess bars and searching for my cultural identity as a mixed-race twenty-something.

As a mixed-race, bisexual woman working in comics, do you find that the themes in your work aren’t common in the medium? Were you spurred to work in comics because you wanted to tell stories that weren’t being told?

Short answer: Not at first, but now, yes definitely!

Long answer: When I started reading comics, I was mostly drawn to queer/punk/feminist comics. For all I knew, ALL underground comics were about queers/punks/feminists, since those were pretty much the only ones I bothered with. And when I decided to start making comics, I saw myself as adding my voice to a chorus of many other queers/punks/feminists. I made and devoured comics in my little bubble for the longest time, blissfully unaware of who was and wasn’t getting recognition.

As for the race thing: Being mixed race (or even non-white) was uncommon where I grew up. I didn’t talk about it much because it didn’t occur to me to do so–nobody would relate, and it would just alienate me further. It’s only been relatively recently that I’ve met people who had similar experiences. And once I did, I suddenly realized how starved I was to connect with this secret family of mine, other people who felt stuck between two cultures, but who identified with neither. Nowadays I devour writing by mixed-race authors, comparing and contrasting our experiences. I wish I’d seen this stuff growing up, but I’m happy to have it now. It has made me bolder to talk about my own experiences with race.

When I started writing Turning Japanese, I thought people might be interested because hostess bars are kind of mysterious. As the pub date gets closer, I see more and more interest because of my mixed-cultural background. I’d initially thought that aspect would be what got in the way of people being interested, so I’m very relieved.

Can you name one favorite thing about doing memoir comics?

Just one? Oh my… I guess the ultimate joy is when I connect with a reader (and somehow find out about it, of course). There’s really nothing like it.

Can you talk a little bit about the Cartoonists of Color and LGBT Cartoonists databases, and why you created them?

I was doing research for an article about writing PoC characters and I started making a list of PoC comics creators to consult. I wasn’t initially aware of many—I think my list topped out at thirty, even with internet research. But I knew there must be more, even if I couldn’t see them! I turned to Twitter and Facebook, and through friends and friends-of-friends I got so many suggestions, I couldn’t keep track of them in my notepad. Soon, I’d made a spreadsheet of about a hundred creators. After I hit 150 or so, I started thinking, “Geez, someone should really put a list of these people on the internet!” It was at that moment that I realized that that person would have to be me. Now the Cartoonists of Color database is almost at 900, which is a far cry from those initial thirty!

At the same time that I realized I wanted to share my findings with the world, the idea of an LGBTQ database hit me. But I was more cautious with this one—I didn’t want to out anybody, so I asked people’s opinions, wondering if I should even do it. I ended up creating my initial list from people who had worked in queer anthologies, with the idea that they were already out by doing so, and letting additional creators who want to be added do it themselves. As opposed to the Cartoonists of Color database, into which anyone can add names to.

Can you give some context for the excerpt we’re going to read?

Sure! The book starts where Kiss & Tell ended up. I had just broken up with my first LTR. I moved a hundred miles away from where I grew up, got romantically involved with my roommate, Giuseppe, and I quit my job. It was an exciting and scary time, rife for a new adventure! And that’s where this excerpt comes in… 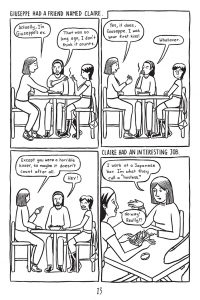 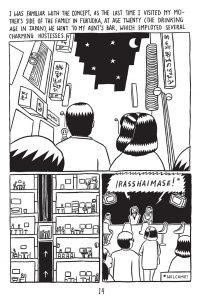 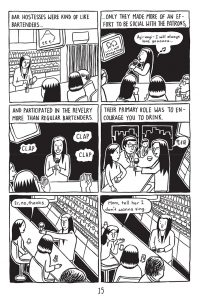 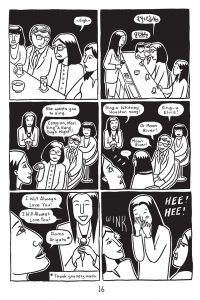 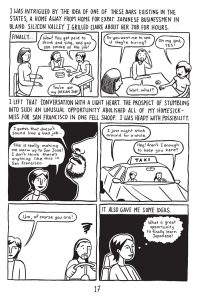