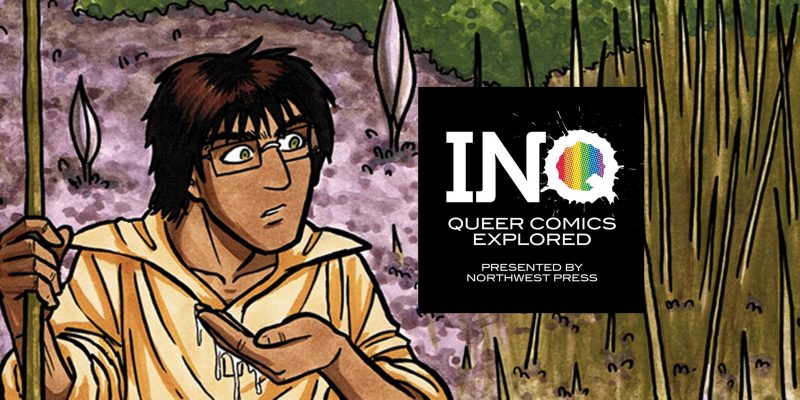 INQ: Dead and Not Loving It In “The Valley of the Silk Sky”

Think you’ve got problems? Not only has Razi been declared legally dead, but the only path to undo the bureaucratic mess is through a forest filled with flesh-dissolving mushrooms, ruthless bandits and deadly wolfcats lurking around every corner!

On this week’s INQ, we’ll talk to writer/artist Dylan Edwards to get the scoop on his new science-fiction comic series The Valley of the Silk Sky, which made its debut in the smash-hit Beyond anthology last year.

Edwards is the author of Transposes, a nonfiction graphic novel exploring the lives of queer-identified transmasculine people, and Politically InQueerect: Old Ghosts and Other Stories, a droll comedy about gay Republicans. He’s also been published in several collections, including the Ignatz-award-winning QU33R and the Lambda-Literary-Award-winning No Straight Lines: Four Decades of Queer Comics.

Edwards shared an excerpt from his new series with me and answered a few questions.

Zan: What is the Valley of the Silk Sky?

Dylan Edwards: Valley of the Silk Sky is a queer YA (young adult) sci-fi webcomic, intended for ages 13 and up. It follows the adventures of a crew of queer and trans scientists as they attempt to discover new medicinals, find lost artifacts, and generally try to avoid being eaten by the more dangerous denizens of the Valley. You can find out more about the comic on the Valley of the Silk Sky Tumblr page.

What will readers find in your comic that they might not find elsewhere?

The primary cast is queer and diverse, with several trans characters in the mix. The culture of the Valley is nonbinary by default, so everyone uses gender-neutral xe/xer pronouns. With several of the main cast at various points on the asexuality spectrum, look for queer ace relationships. While there’s a broad range of identities on display, this comic is not an issues book; rather, the focus is on exciting adventure stories with queer folks front and center. Also, as far as sci-fi tropes go, I’m trying to avoid colonialism as a theme. The biggest threat to peace and prosperity in the Valley is an invasive species of shrub that’s choking out native vegetation and destroying livelihoods in the process.

Can you set up the excerpt we’re going to read?

Being legally dead is causing Razi some problems, and xer only chance of escape from bureaucratic limbo will involve a dangerous trek through wolfcat territory. Meanwhile, Halvanylila is supposed to be learning to hunt and fight, but it’s hard to concentrate when there are fascinating plants to be scienced at. Now they’re both lost in the middle of nowhere, and they’ll need each other’s help and unique expertise to find their way out.

One problem: those wolfcats. Oh, wait, and a troupe of bandits? Two problems. But hey, as long as nothing else goes wrong… 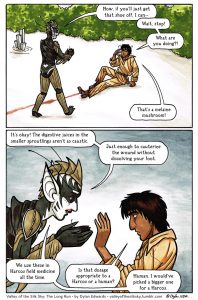 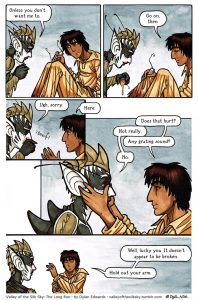 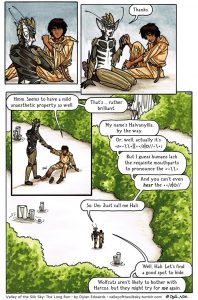 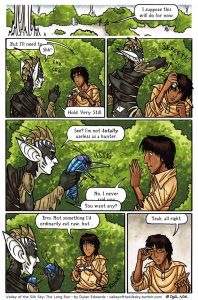 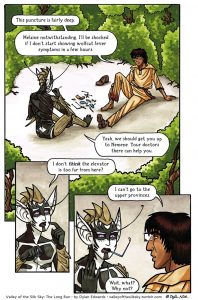 Read more on the Valley of the Silk Sky Tumblr page.

INQ: Equal-Opportunity Slutting Can Be Rough