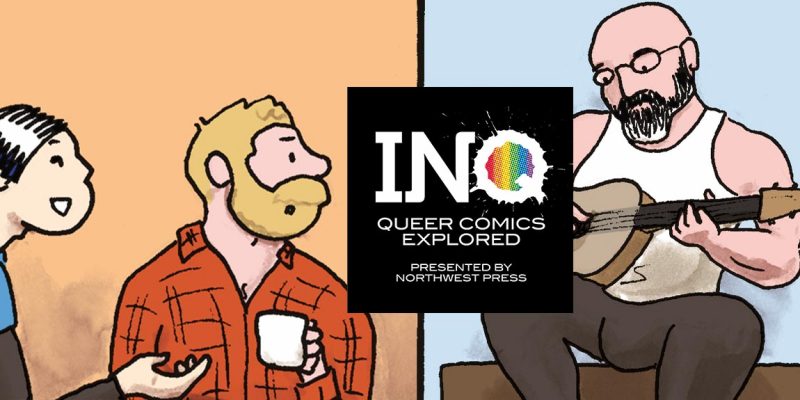 INQ: Equal-Opportunity Slutting Can Be Rough

Tony Breed has been creating comics for ten years, starting with the webcomic Finn and Charlie are Hitched, based loosely on him and his husband. Hitched explored domestic life and family in a matter-of-fact way, allowing his central characters to exist as more than just “gay characters” and gathered a large, extended cast around them over its eight-year run.

That diverse cast took center stage in 2014 when Breed started a new strip, Muddlers Beat. The new strip gave him leeway to play with the whole toy box and explore issues outside his personal experience.

Zan: What is Muddlers Beat?

Tony Breed: Muddlers Beat is about how life is what happens when you don’t know what you’re doing. It’s the story of a group of friends, some young and some middle-aged, muddling through life and love and career. No matter your age, you face the same problems; you just approach them in different ways.

What’s your favorite thing about doing a comics with a large cast?

I like taking different personalities and bumping them up against each other. I hadn’t originally intended for Krys (who appears in the first strip) and Ken to become best friends, but they are just so much fun to write together! I also like that I can explore differing viewpoints with a big ensemble. I can get inside people’s heads and let them be complicated, and I can use these different characters to explore whatever is on my mind: Ken and Corey are figuring out how they feel about sex and relationships, and meanwhile Candy and Finn are figuring out how they feel about their careers.

Can you set up the excerpt we’re going to read?

Corey and Ken dated when Corey was in high school, and they broke up when Corey went to college. Corey went on to sleep with the entire campus, while Ken remained a tragic romantic and serial monogamist. They’ve started dating again, and it’s Ken who decided he wanted an open relationship, and Corey who finds it difficult.

Do the issues in your comic come from personal experiences or those of people you know? Is it sometimes tricky to explore these issues without feeling you’re revealing too much?

Some of them come from personal experience, some are my friend’s experiences, and some are completely made up. All of them are issues that I find interesting and want to explore. I worry sometimes that people will think everything I write comes from personal experience, but I don’t let that stop me from writing what I want. Of course, with an ensemble cast that’s easier than when I was writing Finn and Charlie, where people assume Charlie was me and Finn was my husband and everything that happened to them was potentially a true story. I don’t think anyone thinks Ken is me.

Check out Muddlers’ Beat at muddlersbeat.com.

INQ is an ongoing exploration of the wonderful world of LGBTQ comics, spearheaded by Charles “Zan” Christensen.

INQ: Dead and Not Loving It In “The Valley of the Silk Sky” INQ: Autobiography of a Japanese Bar Hostess