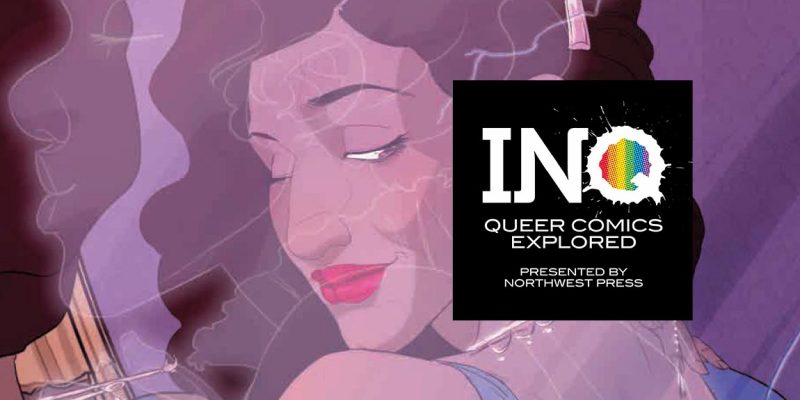 INQ: Fall in Love with a Dog in These Tales of Spooky Queer Romance

Sometimes that monster under the bed just wants to climb up and join you! From Beauty and the Beast to Ghost to (sigh) Twilight, audiences have been thrilled by supernatural love stories for years. But as strange as these pairings can be, the basic story is always “boy meets girl”.

But Melanie Gillman and Kori Michele Handwerker, co-editors on a new collection of paranormal romance comics stories called The Other Side, are serving up a strange kind of love that you can see yourself in.

Zan: What was the inspiration to do an anthology of queer paranormal romance comics?

Melanie Gillman: I’ve always loved paranormal romance!  It combines two of my favorite things in fiction: eerie/mysterious stuff and smooches.  It can be really tough to find queer paranormal romance, though — it tends to be a very straight, cis genre on the whole.  We decided to help fill that gap!

Kori Michele Handwerker: Paranormal romance has seen a huge mainstream boom lately, but it’s been very straight and very white. I just keep following my motto: if no one is making the thing you want, make it yourself.

How is The Other Side different from romance stories that you find in mainstream comic books?

Handwerker: Generally speaking, stories in The Other Side seek to be more diverse than in mainstream comic books, in style, tone and representation.  It was important to us to have a lot queer creators and creators of color telling the stories, and I think much of its success lies in that, and speaks to that difference.

Gillman: Apart from the obvious answer (it’s 100 percent queer, and no story ends tragically!), one thing I think really sets The Other Side apart from most mainstream romance comics is the characters. Even today, most romance comics tend to have a pretty narrow scope when it comes to the types of people they represent — it’s hard to find comics with romantic leads who aren’t young, thin, white, cis, able-bodied, conventionally attractive people.

But nearly every story in The Other Side stars characters who are typically underrepresented in romance comics: trans people, people of color, fat people, elderly people, people with disabilities and all sorts of combinations thereof!  It’s one of the things I’m really proud of in the book.

Does queer romance seem to have any inherent differences from its straight counterpart (in terms of tone or subject matter 0r beyond the genders of the people involved)?

Gillman: If we’re just talking fiction, then no, I don’t think it necessarily has to. One thing we tried to steer clear of in this book was publishing a lot of stories about discrimination or oppression, or stories that just regurgitated tired old LGBTQ-fiction stereotypes. Queer comics — and I think queer romance especially — should just be fun and enjoyable sometimes!

Handwerker: There’s “the queer genre” of comics and then there’s queer “genre comics.” We wanted more of the latter; the genre in question being paranormal romance. So if it’s not a “queer narrative,” or conflict that arises from being queer, then no, it doesn’t need to be different. Some argument could be made that the stories end up being different because often they eschew some of the tropes that straight romance can be steeped in.

Your anthology has reached 130 percent of its initial goal (so far!) and other crowdfunded projects that feature more women, people of color, and queer creators have been doing really well, lately, too. Do you feel a sense of momentum around work that’s previously gotten less mainstream attention?

Handwerker: I think it’s important to note that marginalized groups have always been making their own spaces and their own industries, independent of the mainstream. Gatekeepers and established channels generally keep those stories from reaching a wide audience.

Gillman: What has changed in recent years is mostly that digital media opened up a lot of new avenues for marginalized creators to publish work without having to go through the usual mainstream publishing gatekeepers.

Are the enthusiastic audiences for projects like The Other Side pulling the industry in new directions?

Handwerker: Presumably, the larger capital I-Industry will notice if we make enough money, but whether they will use that knowledge to try and cash in or continue to serve the communities that made it profitable will still have to be seen.

Gillman: I’d like to think that that demand is starting to push the mainstream comics industry toward being more inclusive, but it’s got a looooooong way to go still. In the meanwhile, the best thing we all can do is use our resources to support creators who are still underrepresented in mainstream comics — most of them are still working mostly in small-press and self-publishing venues — and be vocal about wanting the mainstream to change, too! 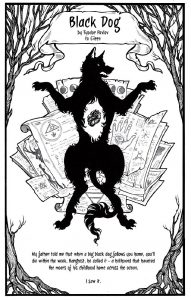 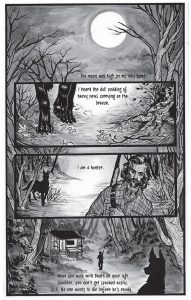 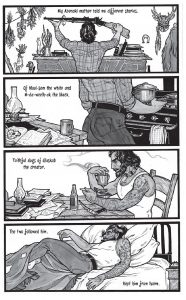 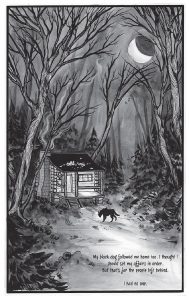 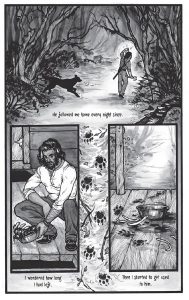 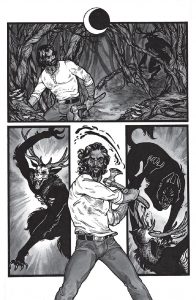 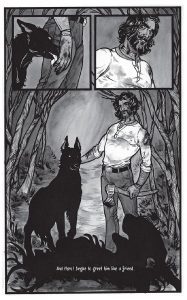 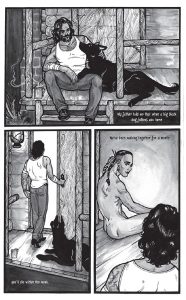 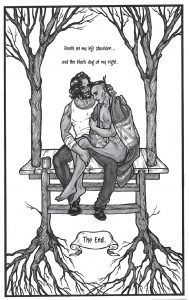 “Black Dog” by Fyodor Pavlov is one of the stories in The Other Side, which successfully funded today. To find out more, visit The Other Side‘s Kickstarter page.