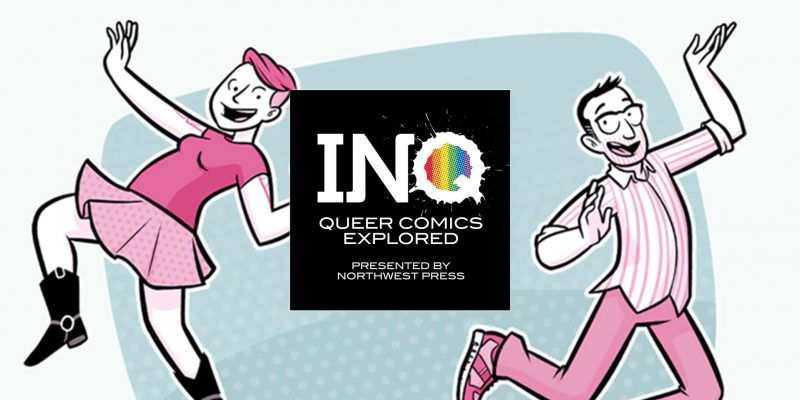 INQ: ‘Oh Joy Sex Toy,’ the Sex Ed Comic Everyone Should Be Reading

The brilliant webcomic Oh Joy Sex Toy is, on the surface, a collection of sex toy reviews in comics form. It’s also a gorgeous ode to the varieties of sexual joy, teaching people not only about the fun contraptions they can incorporate into their sex lives, but about all manner of techniques, positions and health matters.

The strip is in its third year and is co-written by Erika Moen and Matthew Nolan, with art by Moen, and occasional guest strips by an array of talented friends.

Unicorn Booty: How long, on average, does it take to create one of the strips?

Erika Moen: One week! Matt and I collaboratively write the script, I draw it, and Matt colors it. Ideally we can get it done in five days, but some times it takes seven :-/

How often do you end up learning along with your readers — researching and writing about things you were unfamiliar with?

Constantly. I’m not an expert, I have no formal sex or health education, everything I know I learned from Wikipedia, and Planned Parenthood and Scarleteen’s sites. Every time I do an educational strip, I learn so much myself. Like when I was doing the Pregnancy and Emergency Contraception comics, I was surprised to learn that I did not actually for reals know how those things worked. I thought I did, but once I really sat down and researched it to do the comics I was like “?!?!?!!? HOW DID I NOT KNOW THIS BEFORE.“

OJST makes learning about sex entertaining and fun. Has the comic made it into any college classrooms?

I don’t know about classrooms, but some colleges have licensed individual comics to distribute to students as pamphlets during sex ed weeks, which makes me super happy. If any educators out there are interested in doing the same, contact Matthew Nolan!

Also, Limerence Press is now distributing the Oh Joy books! So readers can ask their local comic shop to order them from the June and July PREVIEWS catalogs. 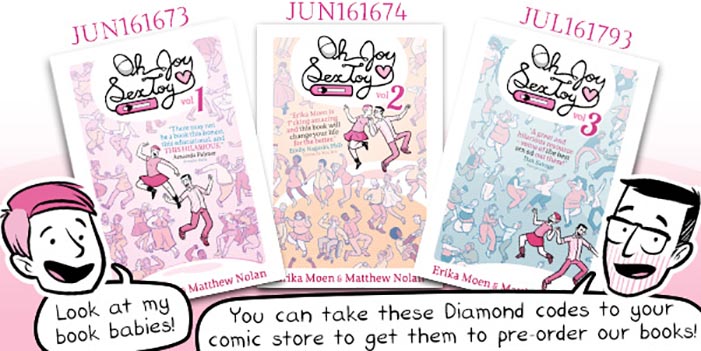 Can you talk a little about body and gender representation in the cartoon cast of the strip, the “Masturbateers”? It seems very diverse and celebratory, without feeling forced.

Aw, thanks! I do my best to draw a really wide variety of bodies because it really is so, so, so important for people to see themselves represented in the media they consume and also for people to be exposed to others who don’t look themselves. Popular media is notorious for predominantly portraying white, cisgender, slim, conventionally attractive, heterosexual people, which has the poisonous effect of casting people who DON’T look like that into the “other” category, and “other” translates to “does not deserve respect and common decency”.

The only way to fight back against that “othering” is to show as many different types of people as possible, to make them visible, to show them being full, happy, humans who deserve love and happiness and respect just as much as the next person. It can help validate the people who fall into the “other” category and also it can help normalize and humanize the “other” to the people who aren’t ordinarily exposed to them. So I do my best to draw as many different kinds of people as possible, though lord only knows “my best” is not always good enough.

I think I actually spend more time compiling photos of all kinds of people to base the Masturbateers on than I do researching facts for the sex education comics. 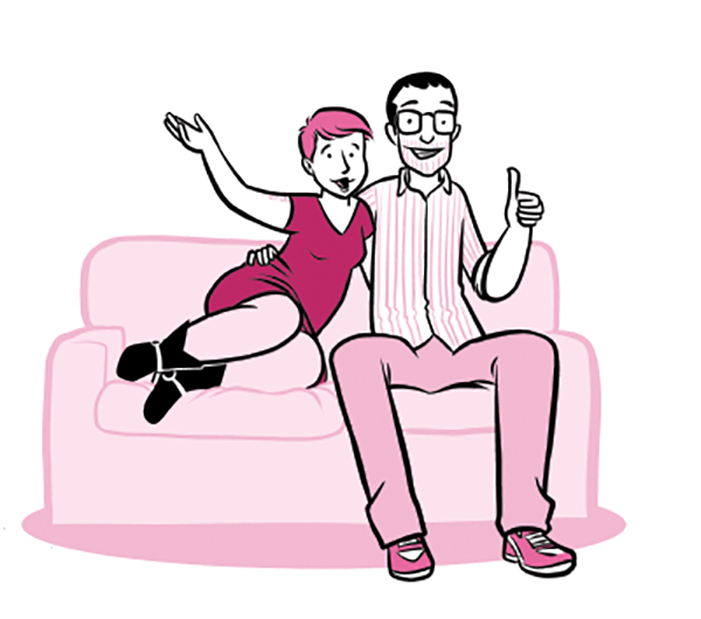 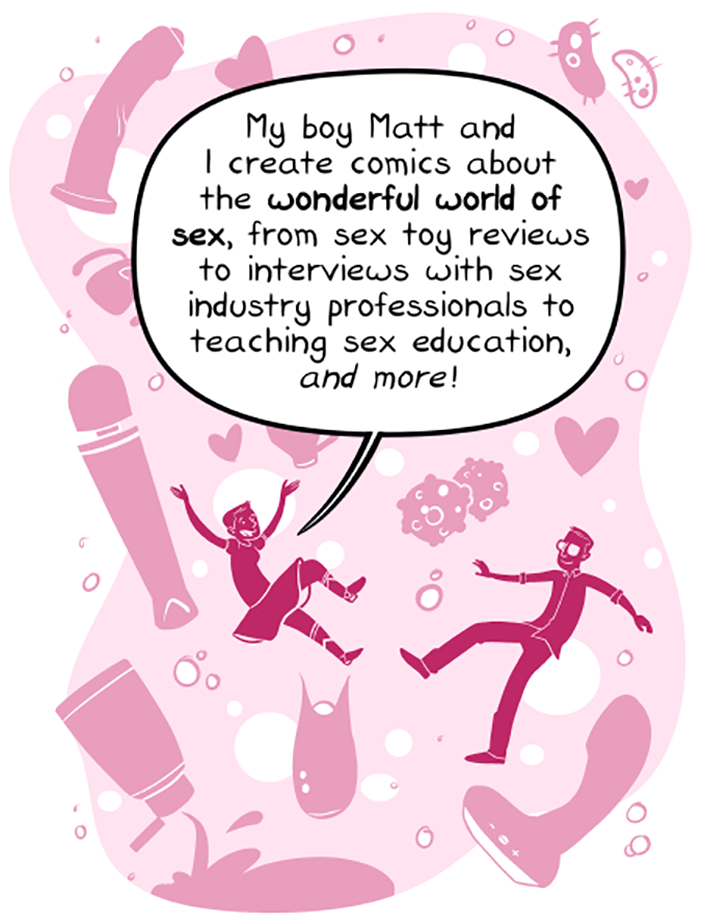 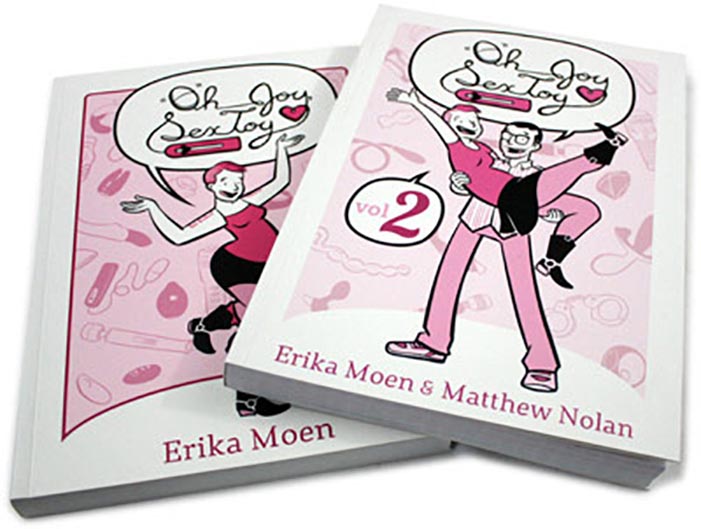 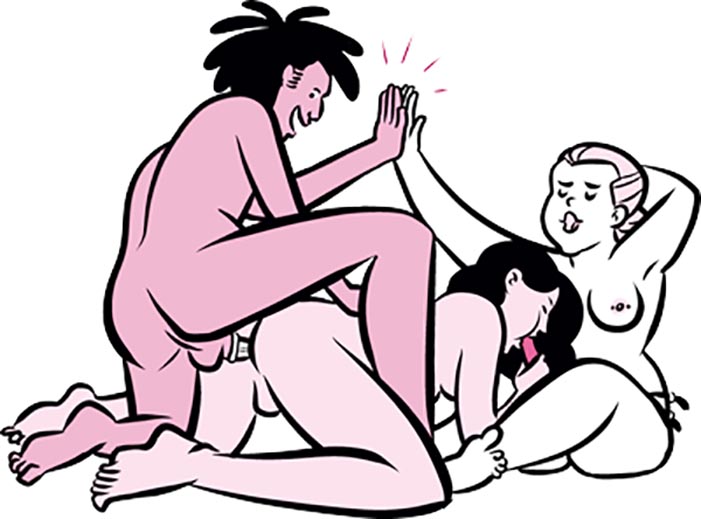 Oh Joy Sex Toy has new installments on Tuesdays, and has three print collections currently available in Diamond PREVIEWS, for pre-order by comics shops near you! (Ask your local store to reserve them for you!) Visit ohjoysextoy.com for more!

INQ: Apple Is Blocking Gay Comics To Keep You from Jacking-Off